Crash Course tries not to give “too much great man history, but we have to admit: Napoleon Bonaparte is a pretty big deal. Join us as we track the rise, further rise, fall, rise, fall, mortal fall, and posthumous rise of Napoleon. This guy changed France, he changed Europe, and in a lot of ways he changed the world.” Transcript.

Ralph Benko, in Forbes, wrote that first of all, a successful 21st century politician must understand narrative — a dramatic story that appeals to the popular imagination — the way that Napoleon understood narrative. In the modern age, mass media has replaced armies for political leverage, Benko observed. “While leading his army over the Alps — a logistically dangerous and daunting process — to invade Italy, Napoleon, according to the John Abbott biography:

Victor Davis Hanson, in Newsweek, wrote that “Napoleon’s own political agenda was a mishmash of conservative authoritarianism and populist social justice.
“Napoleon’s genius” was due to an intuition “that in demoralized France, worn out from both revolutionary fervor and Bourbon reaction, he alone could offer something similar and yet different from both these despised opportunistic factions.”

Hanson compared Donald Trump to Napoleon. Trump “appeals to a similar depressed public that feels the chaos of continual economic and social upheavals—and lawlessness—can easily cease and be replaced by a new national triumphant consensus, if only led by a dynamic man on a horse.”

My friend Bruce Johnson agreed there’s a comparison. Bill Clinton, as president, defined his philosophy as “we’re all in this together” rather than “you’re on your own.” That is “the best critique imaginable of Donald Trump’s proclamation that ‘we don’t win unless everybody else loses’ foreign policy,” Bruce observed, “though Napoleon probably would have agreed with him. Look where it got him…He sent millions to their deaths in an unsuccessful effort to gratify his ego. The 1812 Overture by Tchaikovsky celebrating the victory of Russia defending their country from him is one of the great musical compositions of all time. Remember Quaker Oats?”

I replied that many people, especially the French, still view Napoleon as a great leader. Below, Napoleon’s Tomb in Paris. 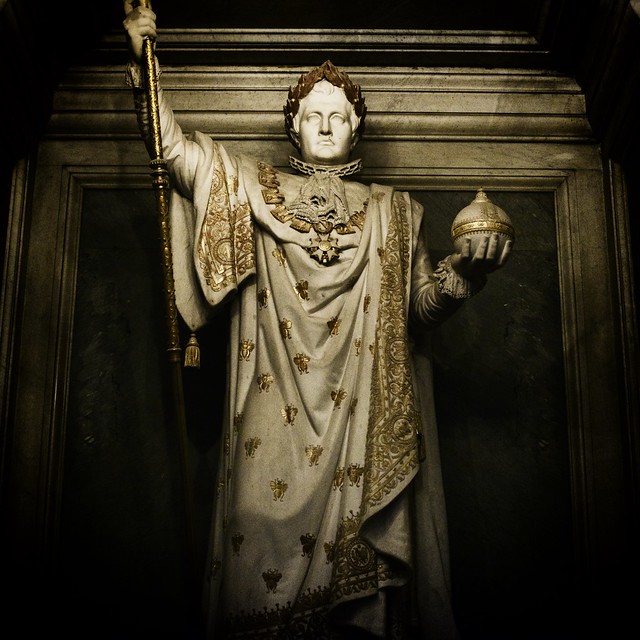 He believed in enlightenment, the age of reason, meritocracy. He built a huge empire, ruling over most of Europe. His victories are studied in military schools. He eliminated the Holy Roman Empire. The Napoleonic Code was adopted in many places. He saved the French government from collapse, and saved the Catholic Church.

The founder of my hometown, Wagram, NC (pop. 800), like many Americans,  was a big fan of Napoleon, and named the town after his defeat of the Austrians. More precisely, “Puff Puff” Massengale, the engineer of the train that went from Laurinburg to Raeford, was an avid fan of Napoleon, and decided that the site of one of his great victories would be a perfect name for the town. His grandson, an attorney in Chapel Hill, NC presented my friend Mary Wayne Watson with a book picturing his ancestor when she gave the Centennial Address for the town in 2011. (Hat tip, David Barrow.)
The reasons “Puff Puff” Massengale and so many others admired Napoleon are articulated by British historian Andrew Roberts:

“The ideas that underpin our modern world–meritocracy, equality before the law, property rights, religious toleration, modern secular education, sound finances, and so on–were championed, consolidated, codified and geographically extended by Napoleon. To them he added a rational and efficient local administration, an end to rural banditry, the encouragement of science and the arts, the abolition of feudalism and the greatest codification of laws since the fall of the Roman Empire.”https://en.wikipedia.org/wiki/Napoleon

Lana Kortchik even has a blog devoted to “On This Day in Napoleonic History,” http://www.napoleonblog.com. She writes on Quora.com:

“Napoleon’s legacy is still important, not only in France but all over the world. Parts of Code Napoleon still remain in legal codes of 40 countries on five continents, including America and Japan. Religious toleration, army and educational reforms, balanced national ledger and equality before law (all the values we take for granted today that didn’t really exist in the nineteenth century Europe) are only a few examples of what Napoleon had given France and other territories under his control. He carried out progressive reforms everywhere he went. For example, when he landed in Malta, although he only spent five days on the island, he opened up the ghettos, freed Jewish people, abolished feudalism, instituted equality before law and completely overhauled the island’s administration…

“Through his sheer ability and true to his words, ‘In every soldier’s knapsack is a marshal’s baton’, Napoleon rose to the rank of brigadier general at the age of 24, became First Consul of France at 30 and the Emperor of the French at 34. He instituted a meritocracy in France, surrounding himself with people of talent from all classes of society. This type of equality was unheard of until then. During the ancient regime, only those of noble birth could advance. During the French Revolution, only commoners could advance. Napoleon didn’t care whether the person was noble or not, whether he was the son of a barrel-cooper, like Michel Ney, or a prince, like Józef Poniatowski. What he cared about was talent and ability. The one question he often asked about soldiers and officers who were recommended for promotion was: ‘Is he lucky?’ Napoleon inspired his troops because he led by example. They knew they could achieve the heights of their ambition because their leader had done it before them. And that’s what makes Napoleon’s legacy important – the message that with talent and hard work anything is possible.”

One thought on “Age of Napoleon: How It Started, How It Ended, His Legacy, How It Shapes Us”

This site uses Akismet to reduce spam. Learn how your comment data is processed.